Egypt orders slaughter of all pigs over swine flu 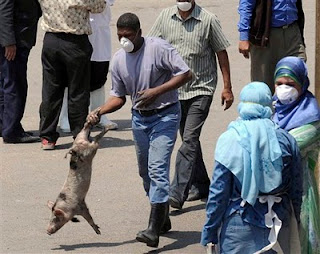 CAIRO – Egypt began slaughtering the roughly 300,000 pigs in the country Wednesday as a precautionary measure against the spread of swine flu even though no cases have been reported here yet, the Health Ministry said.

The move immediately provoked resistance from pig farmers. At one large pig farming center just north of Cairo, farmers refused to cooperate with Health Ministry workers who came to slaughter the animals and the workers left without carrying out the government order.

"It has been decided to immediately start slaughtering all the pigs in Egypt using the full capacity of the country's slaughterhouses," Health Minister Hatem el-Gabaly told reporters after a Cabinet meeting with President Hosni Mubarak.

Egypt's overwhelmingly Muslim population does not eat pork due to religious restrictions. But the animals are raised and consumed by the Christian minority, which some estimates put at 10 percent of the population.

Health Ministry spokesman Abdel Rahman estimated there were between 300,000-350,000 pigs in Egypt.

Agriculture Minister Amin Abaza told reporters that farmers would be allowed to sell the pork meat so there would be no need for compensation.

In 2008, following fears over diseases spread by animals, Mubarak ordered all pig and chicken farms moved out of population areas. But the order was never implemented.

Pigs can be found in many places around Muslim world, often raised by religious minorities who can eat pork. But they are banned entirely in some Muslim countries including Saudi Arabia, Bahrain, Kuwait, Qatar, the United Arab Emirates and Libya.