My articles about the AUB elections in Outlook

By M November 20, 2009
Below are the three articles I wrote, you can read the whole issue of OUTLOOK (pdf) by clicking here.

1) Vote for me; I am your best friend.
M.H. Biology Senior
Letter to the Editor


Imagine this: There's someone who adds you on facebook with a million AUB friends in common, you accept, but still have no idea who she is. Next thing you know she sends you a message saying:


"Heyyy [insert name here]. How are you? Long time no see. You know I'm running for SRC right? I'm counting on your vote, OK? Don't forget me (since I'm your friend n all)! and btw good luck with your exams :D"

Which brings us back to "Vote for me, I'm your closest bestest friend!" You have this look on your face: "say whaaa? do I know you?" and she's like: "you know I was with you in that class. I sat behind you (but you are beneath me and I wouldn't be caught dead talking to you in regular circumstances, but now since I need your vote we should get to know each other, since you know, I am your close friend)."


And just in case you care (which I seriously doubt), you ask about their platform and they bring some perky representative to regurgitate the platform from the last three years while the candidate you are supposed to vote for says: "what she said".


And you ask: "can you really build an escalator from upper to lower campus?" and they go "definitely, do I think I joke with issues like these?" while they pose and turn around for you to admire their godly beauty, as if on a cat walk or a red carpet with cameras flashing.

Then comes along one who whispers: "You're [8/14] right? You have to vote for this full list. Don't remove anyone! Don't add anyone! What's your name and number? You know in case you didn't show up on election day so we can drag you to vote. I know you don't know anyone from the list, and I know they have no clue what SRC stands for, and I know that they have brains of rabbits, but you have to vote for them anyway, because you don't want the "others" to win, do you?"


In case you are still blinded and haven't yet noticed, the tuition has increased more than a thousand dollars this year (in FAS) and the SRC/USFC did absolutely nothing about it. What makes you believe that any of these prancing hooligans can really make a difference this year? Is it their energetic promises, their cheerful hairdos or their platforms that came from the history book?


The whole AUB elections are really nothing but a tragic comedy. They are there to promote fake democracy. Does anyone care about improving the departments, giving raises to staff to improve efficiency, and improving teacher's quality? Have you seen the AUB medical school? Have you seen how pitiful its classes, labs and hallways are? Its right out of 70s prison movie, and the bathrooms in these movies are much better. To think that students pay $104,000 to graduate with an MD. It's a shame how they spend 4 years of their lives like lab rats.


That is why I do not believe any candidate is worth my vote, and your vote as well. Political candidates are sheep to fake ideologies while independents are only there to prove that independents can win, or to show how popular they are, or to promote clubs. None of them can really accomplish anything for AUB or its students.

Biology Professors Riyad Sadek and Khouzama Knio both agreed that the elections were well-organized and quite calm. Knio pointed out that there was approximately a 70% turnout for the FAS Juniors, which is less than last year. “Students are bored of politics,” Knio said and Sadek agreed. “What happens here reflects the mood of the country and the mood right now is going towards calming,” Sadek said.


Additionally, Chemistry Professor Najat Saliba also thought that the elections were very calm and professional. Chemistry Professor Bilal Kaafarani, who was counting votes for FAS graduates, said that “the voting and counting process went very smoothly and everyone was pleased with the results, especially that graduates are less politically-affiliated than other students. Students who won got almost double the votes of the losing candidates.”

While counting ballots, History Professor Nadia Cheikh hoped that the peace that existed during the day would continue after the results. Philosophy Professor Bashshar Haydar, who was at the same table, stated that “the students were able to continue the tradition of civility this year and I hope that this level of maturity continues to later years.”


Coordinator of Student Housing Nawal Semaan helped with counting ballots of the Faculty of Medicine. She said that “Elections in this faculty were very mature and non-political and I am glad that these students are willing to negotiate and work together. We do not usually face many problems each year, and I’m glad that this year’s elections were peaceful.”


Some faculty, however, were annoyed that they had to recount the ballots because of a misunderstanding about which ballots are considered void and which are not. Apparently, the Dean of Student Affairs had set guidelines for faculty to follow. In short, these guidelines state that all names that are not completely and correctly circled should be considered void. Many of ballot-counters were not aware, however. Some votes were counted that should not have been and, thus, the boxes had to be recounted. Nonetheless, some boxes were not recounted and some mix-ups occurred. Junior FAS candidates from Student League were protesting the guidelines even though they won. Staff were encouraging the candidates to explain the circling system to their friends for next year’s elections. 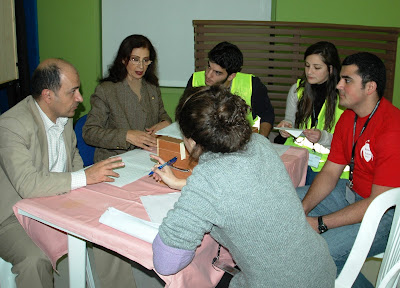 Overall, the faculty and staff were satisfied with the elections, unlike many candidates and students.


For two years, the Student Affairs Office (SAO) has been installing huge screens next to West Hall to display the election results. Very few people know the person behind the laptop entering the results. Computer Science senior, Rami El Outa is that mystery person. He is the webmaster for the SAO and has been in this position for several years now. In an interview, he said that this year's elections were very calm and quick. "This year, we hit a record by publishing the results by 8:15 PM while last year, it took till 9:30." Additionally, he said that "not everyone was satisfied with the results and took them with good sportsmanship. I am proud that AUB's elections were the most successful among all major universities, and it is the first time there were no ties in any of the faculties."


Upon being asked about the amount of work the elections took, he explained that the whole Office of Student Activities started preparing more than 15 days ago. Personally, he prepared the lists of voters and candidates, updating the website, time schedules, and locations, and designing badges while juggling seven courses, four exams and two projects. He commented that the screens were fun and successful. He is particularly proud of the on-screen jokes that he made and the videos he showed to lighten the mood. "In my opinion, announcing the results this way is better because everyone will be distracted by the screens and less conflicts occur."


He hopes that everything goes well next year since he will be graduating this year. "Working here was awesome!"


Below is the report done by the MTV reporter which aired the night of the elections.


All photos are subject to copyright of the AUB Campus Yearbook and were taken by Mohammad Hijazi.