By M November 23, 2009
Meet Griffin, the grey parrot, whose astonishing vocal and physical skills are demonstrating just how smart the avian world really is. 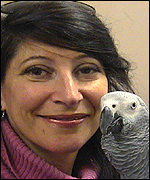 Griffin has recently begun to play with objects and speaks English in a way that raises fascinating questions about the thought processes going on inside a bird's brain.

The parrot will stack different-sized bottle caps in the right order, for example. He will also mix up the English words he has learned, and will say simple phrases, like "wanna green nut".

This type of behaviour was once thought to be exclusive to humans, great apes, and monkeys. Griffin suggests Parrots should be added to the list.

"Human children start combining their labels at about 22 months," says Dr Irene Pepperberg, who works with Griffin at the Massachusetts Institute of Technology. "So, they start not just identifying 'cookie' and 'milk', but will say 'want milk' or 'want more cookie'.

"And they also tend to develop this combinatorial behaviour at the same time as they start doing physical combinations of their toys. So, they will start stacking cups in serried sizes, and things like that."

She told the American Association for the Advancement of Science meeting in Boston: "The simultaneous emergence of both vocal and physical combinatorial behaviours was always thought to be a purely primate trait, derived from primate brain area.

"The fact that we are finding this in animals so far removed from primates is exciting."

With children it is clear they are developing an overall thought process that is permeating both their language and physical behaviour. Researchers have even proposed that a language-related region in the brain, called Broca's area, is controlling these abilities during the earliest stages of development.

According to this hypothesis, combinatorial behaviour may be the very first stages of using syntax, the word patterns involved in language. Is Griffin using syntax when he mixes up his words and stacks his bottle tops?

"I wouldn't go so far to say it is syntax in Griffin but it is definitely a rule-governed behaviour and it is very striking in the sense that it is very similar to what children do, and what language-trained chimpanzees do at the same period of development," says Dr Pepperberg.

"And it suggests that there is either a very, very distant ancestor common to these groups, or that there is what we call convergent evolution meaning that these behaviours arose in these different species separately."