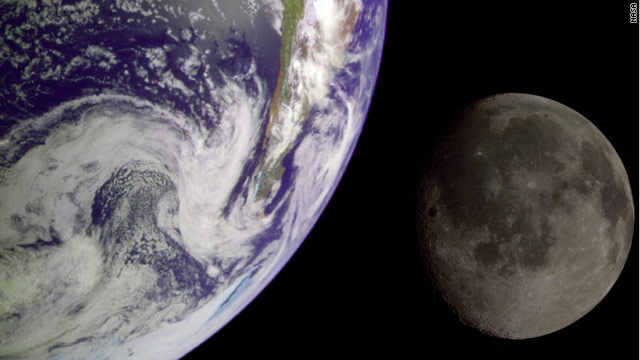 (CNN) -- It happens only once in a blue moon -- and scientists say a blue moon is exactly what we'll see in the skies this New Year's Eve.

Don't expect an azure glow over our lunar satellite, however. The term "blue moon" simply refers to the second full moon in a calendar month, something that hasn't happened on a New Year's Eve for nearly 20 years, NASA says.

"December 1990 ended with a blue moon, and many New Year's Eve parties were themed by the event," said Professor Philip Hiscock of the department of folklore at Memorial University of Newfoundland, in Canada. "It was a lot of fun."

Most months have just one full moon, because the 29.5-day cycle of the moon matches up pretty well with the length of calendar months. Occasionally, there will be two full moons in a month, something that happens about every 2½ years, NASA says.

But a blue moon on December 31 is rare.

It is possible for the moon to have a cerulean hue, NASA says, but that's sometimes caused by fine dirt circulating in the Earth's atmosphere or the dark blue tone of the sky.Elvis Presley crooned about it when he sang the old Rodgers and Hart song "Blue Moon," in which he stood alone without a dream in his heart or a love of his own.

He struck a more hopeful tone in another tune, singing about his love returning to his arms "When My Blue Moon Turns to Gold Again." He also covered Bill Monroe's bluegrass classic, "Blue Moon of Kentucky."
A blue moon hasn't always meant the second full moon in a month. Hundreds of years ago, it simply meant "never" or "absurd," Hiscock said.

"The phrase 'blue moon' has been around a long time, well over 400 years, but during that time its meaning has shifted," he said. "I have counted six different meanings which have been carried by the term, and at least four of them are still current today. That makes discussion of the term a little complicated."

When the Indonesian volcano Krakatoa erupted in 1883, it put so much dust in the atmosphere that the moon actually appeared blue -- an event so unusual that the term "once in a blue moon" was coined, according to NASA's National Space Science Data Center. The effect lasted for almost two years, Hiscock said.

Full moons used to have 12 names, one for each month, such as "harvest moon," NASA said. The term "blue moon" referred to the 13th full moon in a year.

The term acquired its current meaning in the 1940s, after the Farmer's Almanac of Maine offered an astronomical definition of a blue moon "so convoluted that even professional astronomers struggled to understand it," NASA wrote on its Web site.

A writer at Sky and Telescope magazine in the late 1940s tried to explain the almanac's definition by saying it referred to the second full moon in a month.

"That was not correct, but at least it could be understood," NASA wrote. "And thus the modern blue moon was born."