'Lost' wins out over State of the Union 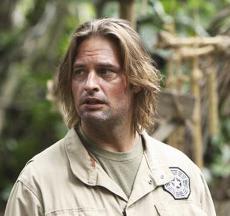 President Obama will not give his State of the Union speech on Feb. 2, the night ABC has scheduled the premiere of the show's sixth and final season. The mere mention of the date had sent fans racing to launch a Twitter protest campaign earlier this week.

"I don't foresee a scenario in which millions of people that hope to finally get some conclusion in Lost are pre-empted by the president," White House spokesman Robert Gibbs told AP today. He later added, "I assume it's a big deal at ABC." No word on when the State of the Union will actually be.

Meanwhile, Variety reports today that Disney execs are trying to figure out how to keep the Lost love alive after the show ends - with novelizations, comic books, games, re-cut Lost DVDs and even the "oft-rumored Lost amusement park attraction." It might even mean a a new TV or feature take on Lost, with a new cast. In other words, says Variety, Lost: The Next Generation. [via]

You can watch the full episodes of lost, including the season 7 premiere online a few hours after it airs in the US on Cucirca.com