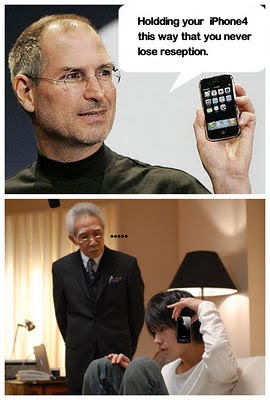 According to The Independent, the iPhone 4 that was released in the UK ten days ago has a major fault. The phone that costs £599 (around 900 US dollars) has to be handled very delicately as not to touch the aerial which is embedded inside the casing.

Angry costumers were told to pay an extra £25 ($37.5) for a rubber bumper which presumably solves this problem.

Apple has reportedly told its employees not to promise the costumers free rubber bumpers even though the flaw in the phone is the company's fault.

In a leaked memo, Apple says "We ARE NOT appeasing customers with free bumpers – DON'T promise a free bumper to customers."

The memo also instructs staff to tell costumers not to cover the lower left hand corner of the phone and explain to the customers that "the phone's wireless performance is the best we have ever shipped."

The Independent stated that "the company is already facing lawsuits from at least three customers, relating to antenna problems with its latest model, but Apple's chief executive, Steve Jobs, insists that owners need to 'just hold it right'."

This is probably another of Apple's strategies to keep its products rolling out in the market. This strategy entitles producing flawed products and releasing them into the market in order to continuously keep releasing updated versions to make more money.

It is silly that the company will not cover the expenses of its own faults, even if it will boost its image greatly.

As for me, I'd rather stick to stable and un-flawed phones for the time being, no matter how shinny and attractive some phones' exterior may be.