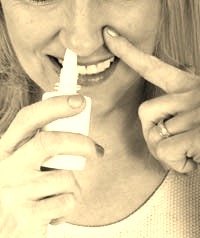 Patients who got the treatment for four months showed improvements in tests of memory recall that lasted for two months.

"We believe our results are very promising and they warrant future trials," said Dr. Suzanne Craft of the VA Puget Sound Health Care System and the University of Washington in Seattle, who presented her findings at a meeting of the Alzheimer's Association in Honolulu.

Alzheimer's disease is a fatal and incurable deterioration of the brain that affects 26 million people globally. It is the most common form of dementia.

Several studies have suggested that people with Alzheimer's have reduced levels of insulin in the brain, even in the earliest stages. Insulin is important for communication between brain cells and is needed for brain function.

Craft's team wanted to see what would happen if they delivered insulin directly to the brain.

A third of the patients got a placebo and the other two-thirds received different doses of insulin that had been loaded into a nebulizer and squirted up their nose twice daily for four months.

Patients who got the lower dose of insulin showed significant improvements on all primary measures of thinking and memory and in a test of their ability to do daily activities.

In 15 insulin-treated patients who agreed to a spinal tap, the team found a link between improved memory and improvements in measurements of key proteins linked with Alzheimer's disease.

Craft said the treatment is a long way from being useful to patients, but the findings are strong enough to be studied in a large clinical trial.

Current Alzheimer's drugs only treat symptoms, but so far no drugs have been shown to improve memory in patients with Alzheimer's.