Why I Hate Apple

By M February 27, 2011
My friends and probably people who follow me on twitter probably know that I do not like Apple (probably much more than not liking - perhaps despising). I'm sick of people keep bombarding their Apple products in my face every time I say something, and I am sick of the shameless brainwashed promotions from live conversations to social media to TV programs and ads.

Upon the request of one of my friends, I would like to share my reasons for this hatred to Apple as a whole, and not any certain product.

The Apple brainwashed culture
It is perhaps what I hate about it the most: the over-zealous fans (or shall I call addicts) who are eating, drinking and breathing Apple and are basically walking billboards for the company. I like Google and Facebook and you don't see me shamelessly promoting them like crazy every chance I get. And it's not even just that, Apple owners think they are better than other people, that they are some sort of super-humans. Let me tell you this: owning a Mac or an i-related device and flaunting it in front of the whole world doesn't make you cool, its makes you a douche.

The Apple business strategy
This is what a lot of people fail to see. The whole business strategy of Apple is to gradually produce better products forcing the costumer to constantly pay more and more to buy the latest models.
The prime example of this is when Apple produced the first generation iPhone. It was lacking the most basic of features that a 1995 Nokia phone offered. These included forwarding an SMS message, copy-paste features, bad reception, no custom sounds for SMS & e-mails, video-recording, MMS, etc... Was Apple not aware of these features or did they not have the technology to include them? No. They just prefer to constantly release updates and new versions to make costumers run and buy them to make more money. 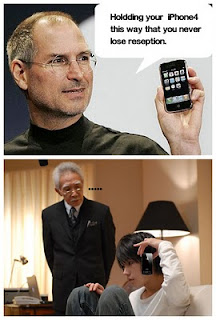 Early last summer, when the iPhone 4 was released, many costumers were complaining about bad/no reception. Steve Jobs had to "teach" costumers how to properly use the phone so that they get reception - performing yoga every time they had to make/receive a call. But that's not the worst part, angry costumers were told to pay an extra £25 ($37.5) for a rubber bumper which presumably solves this problem.
Apple has reportedly told its employees not to promise the costumers free rubber bumpers even though the flaw in the phone is the company's fault.
Of course, after a huge media uproar about the topic, it was more or less forced to give these bumpers for free after realizing that sales will be dropping and the company's image is at stake.
Other companies (like HP) would gladly recall defective products and replace them, and not play charades with costumers who are already paying shit-loads of money for the product.

Apple is so perfect, so let's blame others
After many iPods got infected by a worm (virus) last year, all Apple did was blame Microsoft saying "As you might imagine, we are upset at Windows for not being more hardy against such viruses, and even more upset with ourselves for not catching it." [source] Personally, I don't think Microsoft is responsible to ensure proper security for Apple products. They didn't even apologize or call back the alleged 1% of the defective products.

Pay Your Heart Out

Okay I get that Apple is so proud of its design and that it is very unique, but that doesn't justify charging for their products with at least a 200% profit margin. They even charge for Microsoft Office for Mac more than what Microsoft is charging for it. I'll let the adjacent infographic speak for itself.

Touch Obsession
So what's great about touch phones and pads really? Touch screens on phones and pads greatly decrease productivity. Using a regular keyboard or phone buttons, you can type a text message or email ten times faster than with a touch screen keyboard

It seems very ironic when the world is going towards open-source programs and information sharing that Apple decided to lock their products to certain mobile service providers. Not only does that limit their sales, but they are missing out on so much profit internationally where the phones are being cracked or jailbroken and sold for twice if not three times the actual price. Besides, why would someone buy a product that forces me to buy another service that I may not be satisfied with? Or why would I buy a cracked product that I need to re-crack every time there's a new update to the OS?

The lockdown is not just limited to the iPhone. How about iPods that do not read music formats except .AAC and .MP3? Or the fact that you cannot extract the songs bought from iTunes to any non-Apple product because the are encrypted? Why would I put myself through such a limitation?

It's bad enough that you are being charged so much money for your mac, you then discover that 90% of the programs or games are not compatible with MacOS. It's either you have to put yourself through enormous amounts of trouble to find a way to make it work or just forgo that program. What Macs seem to be useful for is designers (its not like PCs can't do the same job). But designers (don't even get me started on them either, you'll probably soon be reading a list of why I hate graphic designers) think they are sooo special because they forced their mommies and daddies to buy them their Macs because they cannot possibly live without them. What irritates me the most is the refusal of most of them do you photoshop on a regular PC. Are you really that thick-headed that you cannot manage to use a PC anymore?

Back to incompatibilities, what's up Apple feud with Flash? Seriously? Why would I buy a product who's producer are so moody and keeps fighting with other big companies that I daily depend on (like google)?


There's a lot of more things that I could probably add to this list and I could go on forever but honestly I don't think this topic deserves much more typing so I'm gonna end it here. Enjoy your intentionally prehistoric products, as for me, I will be sticking with PCs for now; thank you.