The July 2006 Lebanon/Israel War: My Story

This is a repost guest post by a good friend Hala Hassan which was originally posted at A Seperate State of Mind, a recommended blog by another great friend Elie Fares. 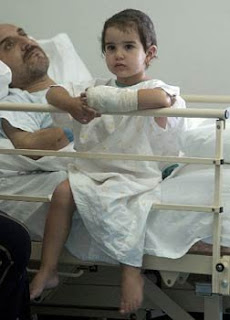 Hear it from those who were there.
A neighboring country at war, you sympathize.

Innocent civilians torn into pieces under the wreckage of their houses, you shed a couple of tears.

But what if you were that citizen in that country, held up in your house, scared like you’ve never been, reciting every single prayer that ever crossed your mind for those bombshells to stop and those warplanes hovering in the sky to go away…

Yes, it’s been 5 years since “July war”, “the 33 days war”, “the 6th Lebanese/Israeli war” or whatever they want to call it. But for that traumatized girl, it still feels like yesterday…

To survive a war is one supposedly satisfying ending. Not to have lost a family member is considered a blessing. But for a 17 year old, survival was not enough to overcome such an altering experience: A slamming door, a blowing wind, even fireworks… any sound still triggers her fearful memories and is capable of causing her a panic attack.

She still remembers each day and date in the intricate details of their events. She still remembers that Wednesday July 12th when her father called asking her not to be alarmed if she hears distant explosions. She remembers how he came back that afternoon ‘whistling’ trying to make her and her sisters feel like everything was just fine. She remembers how she had to share a bed with her older sister that night, freezing at instances and suffocating at others out of fear. The warplanes had started violating her sky that day. They wouldn’t leave till late August.

She still remembers the following two days she spent in the supposedly “safest room” of the house – back then “safe” meant having a double ceiling, no glass windows and least furniture – and how she kept on squeezing her mom’s hand relentlessly all night like a 2 year old.

She still remembers the voice that emanated from the radio, her only way of communication with the world, asking her and other Southern residents to leave their villages. Or else. That radio also conveyed news about those innocent civilians, who got betrayed by their naïve expectations, upon leaving their houses thinking that a white flag would save them from being savagely murdered.

She still remembers that shelter in her grandparents’ house: a tight narrow tunnel lacking light and at some points oxygen in which she sought mistaken safety with other family members and neighbors. She still remembers the smell of those sweaty fearful souls and the cries of those frightened hungry kids.

She still remembers July 19th when her peaceful village was attacked by deadly showers of cluster bombs, those internationally banned bombs that kept on dropping like rain for hours during which she felt the epitome of fear, leaving behind a dead woman and many serious injuries. She still remembers that awful silence following the disaster, a silence which was not broken until a few of hours later by the siren of an ambulance that waited a long time to be given permission to come for rescue.

She still remembers July 21st when a vehicle of the Lebanese army was bombarded in her village leaving behind severely burnt soldiers, even though the army was left outside the equation back then.

She still remembers her 8-year-old sister hugging her physician father as he was leaving them to help in rescue efforts, begging him not to leave as everyone watched the scene and wept.

That day was her last in her beloved village because the citizens whose cars “survived” the attacks decided to leave. Food, water and medication had become scarce. And most importantly it had become obvious to them that they were targeted to be killed.

That day she saw her father covering their car with a big white piece of fabric. She saw frightened people struggling for seats in the leaving cars, which got stuffed with traumatized flesh and blood seeking refuge…. The last face she saw was that of her grandfather at the house gate. He refused to leave because for him life does not exist beyond that gate.

She still remembers that cursed journey to the Bekaa, every moment she spent looking through her window praying for that Apache not to show up in the sky and turn her and her family into pieces. She still remembers those endless days she spent crying and thinking of the life she left behind, wondering if she’ll ever be back.

Who said time makes people forget their previous fears and overcome past sufferings? Well, here is something that girl has come to learn: child or elderly, woman or man, illiterate or educated, everyone who survived that war has suffered and still is. They are all hidden victims that no one ever bothered to soothe their psychological needs and problems.

That 17 year old is turning 22 soon. She is a graduate of the American University of Beirut and planning a medical degree, which makes her someone who supposedly has been provided with the best education and environment to overcome whatever distress she has been through. And yet that girl is still held up in that summer. As a friend of hers always suggests, therapy might be the best solution for her condition. Therapy might put an end to the nightmares. It might alleviate the effects of the past pain… but the scar will always remain, carved with blood and tears in her memory.

They say what doesn’t kill you makes you stronger. For that girl, this saying has become a belief. 4 days after the battles stopped, there she was, back in her village along with most of those who left, challenging all the difficulties and threats. Everyone had one common goal: rebuild the destruction, heal the wounds and restore life in their beloved South. After all, it’s Lebanese determination that was being tested. Who is better at acing such a test than those who have endured vicious wars throughout the years, one after the other? History will probably keep on telling their stories of glory and courage until the end of days.