Nokia “App Patrol” takes to the streets and lay the smack down on Smartphone application violators. 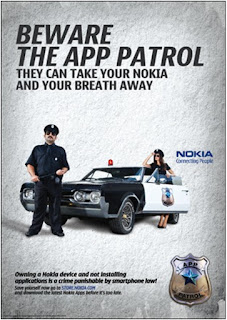 Beirut, Lebanon - Nokia thinks that way too many phones are being held hostage in the wrong hands by users who own the latest Nokia devices yet are not installing the applications that make these devices thrive the way they were meant to. So Nokia have unleashed an “App Patrol”, a group of dedicated “Smartphone law” vigilantes who don’t take application matters lightly.

These patrols will be on the lookout for the most serious Nokia application offenders, ready at the drop of an app to arrest and fine these violators!

Keep an eye out for the App Patrol as they have planned raids at universities, malls, cafés, cinemas and other application offender hotspots in Beirut.

The App Patrol has issued a public warning on their YouTube channel to notify all the application criminals in Beirut to take heed and make sure they get the right applications for their Smartphones in order to avoid being prosecuted by the Nokia App Patrol.

Patrol warnings and the right thing to do:
Four videos have been posted to the App Patrol YouTube channel http://www.youtube.com/user/apppatrol describing the situation the App Patrol is dealing with. It’s not pretty but it’s the best way to announce to all the smartphone law breakers that the Nokia App Patrol is coming.

The Nokia Smartphone laws are clearly stated on the Nokia Lebanon page (http://www.facebook.com/NokiaLebanon), explaining what people are risking in case they are not in line with the basic application standards.  The video warnings and fines that you can receive, can be averted by going to store.nokia.com and downloading your apps. The snitches in Beirut can even tell us about those that break the smartphone law and if he/she goes to the store.nokia.com, he/she earns them an extra point and gets them closer to winning a new Nokia 700.

You have been warned!