By M June 30, 2012
Prepare your red carpet outfits and dancing shoes, it's going to be a blast!

Geekfest 5.0 will bring out all that is geeky in fashion and blend it into the urban tunes of modern Lebanese Bands and Performers. Though geeks would not admit they are into fashion, we do know that there is a certain subcultural attire associated with them and we are about to expose it to the world! 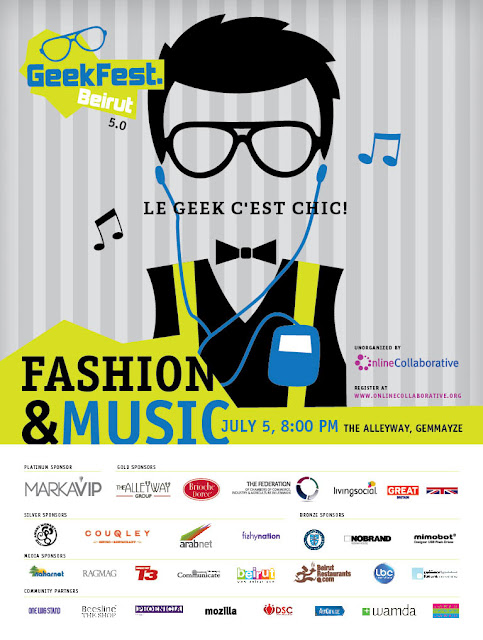 9:30 | On the Catwalk!
Everybody knows that Geek is the new sexy! And we’re here to prove it! Our red carpet fashion show will feature:


10:15 | Let the Music Play
This year Geekfest will blaze with music performances from up and coming Lebanese Brands hosted in the cool space of The Angry Monkey including:
ONGOING - The Art Show
The Union’s Space in Gemmayze will be turned into an art expo featuring an exhibition on how Music influences art by Sandra Issa.

ONGOING | Food & Drinks (Optional)
Entry to Geekfest and participation in all of its side events is FREE, however, you may choose to reserve a place for dinner or drinks & snacks at two of The Alleyway's locations or have anything on their menus. These deals are made solely for GeekFest Beirut attendees. Reservations are processed here.