The Education Revolution: Social Media and Education in Lebanon

By M April 11, 2012
Two weeks ago, I was attending the Arabnet Digital Summit and I insisted to attend the sessions about Education to understand more about the view of professionals and educators towards the use of technology in education. Needless to say, I was disappointed with what most of them had to say.

The speakers still had a traditional approach to education, a Web 1.0 approach as I like to call it. They only cared about using technology to push material to their students rather than stimulate and encourage them to learn. They were promoting 20-year-old technologies such as Blackboard and Moodle (which are basically sites that host the lectures and are traditionally structured to minimize interaction). Some were bragging that they  have implemented these programs in their schools and universities as if it was the most advanced technology and will bring great benefit to their students. Others were promoting them because they sell these programs for millions of dollars to Arab educational institutions. They probably don't know that some universities have stopped distributing emails anymore, but instead they are giving their students tablets and e-readers.

Not only that, they were criticizing and opposing the use of social media in education, partly because they have probably never ever used it before, and because social media channels are free. They still have the old-fashioned mentality that free software cannot substitute for overly-priced barely-customizable software that they buy for their institutions to show off.

Why am I being so offensive, you ask?

Because for the last five years, I have been using these technologies at AUB, and I can tell you this: they have not enhanced the learning process for me at all. They are only used to share slides with the students, something a simple Dropbox-like application can do. Another reason is that I have witnessed first hand how beneficial the use of social media can be to education.

During that day, I had to intrude and express my opinion to the speakers and I said the below (more or less) in defense of Mrs. Leila Khauli Hanna's presentation in favor social media in the classroom:

I am graduating from the American University of Beirut with a BBA in Marketing (among other things). But I don't attribute the knowledge that I have acquired to AUB at all, because let's face it, even at the best institutions, the Lebanese teaching system and curriculum is extremely lacking. I attribute my education to my enthusiasm and willingness to learn that was fulfilled by Wikipedia, Facebook and Twitter [and Google of course]. They were the main source of information and education for me. Five years at AUB, I probably don't remember any of the material I studied in boring traditional courses. I don't remember anything about Cell Respiration or Bioinformatics (Biology being my first major), I don't even remember anything from Business Law either.

Yet I was fortunate to take took courses with possibly the best teacher at AUB, Mrs. Hanna. At first, I did not know what I have signed up for. I thought it would be just another marketing course. But these courses were structured in a way to stimulate the students' minds and encourage them to look for the information themselves and learn what they wanted to learn. Unlike other old-fashioned professors (I'd don't want to call them closed-minded) who kick you out of class if you even had your cell phone on the table, Mrs. Hanna made it mandatory for students to use their smart-phones and laptops in class to enhance the learning process. If that is not enough, the whole course communication relies on Twitter, a free and readily-available tool for all students. The participation grade of the course was based on the online interaction of students. This enabled the shy students to participate much more, and allowed the course material to be crowd-sourced, not only by the students, but by everyone who accessed the course hashtags on twitter (#mktg225 and #mktg250D). 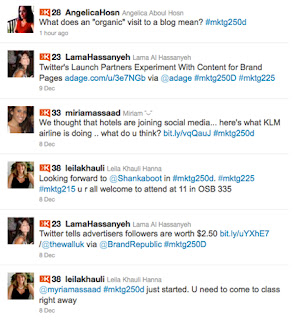 But why have I learned so much from these two courses (Marketing Communications & Digital Social Media Management), even though the learning objectives are as interesting as most of the other courses? First, it is because of the open-mindedness of the instructor that allowed the learning process to be smooth and free of the traditional stiffness of education. Second, the ease of the use and implementation of social media in the classroom allowed all the students to discuss course material freely. Third, the course was always up-to-date with the most relevant topics in the marketing industry because the instructor was willing to research new material for every session (unlike regular instructors who use the same material decade after decade), Forth, the enthusiasm that students get from finding what they want to learn will cause them to actually learn the material and not memorize and regurgitate them on exams. Fifth, the course has become a part of my life and not an annoying 9:00 AM class that I sleep through. (Believe it or not, I was excited to wake up early for the class). And finally, because it was fun! Why teachers have to make education so boring and as schools as prisons is beyond me.

I think what Mrs. Hanna has introduced to education is far more valuable than any education management system that anyone created. Granted, she did not create any software or invent the light-bulb, but she did revolutionize the education system. Yes, it is an Education Revolution and I believe every single teacher and school should consider implementing a similar learning system.

It makes me proud to have been, and still be, a student of Twitter and Mrs. Hanna.