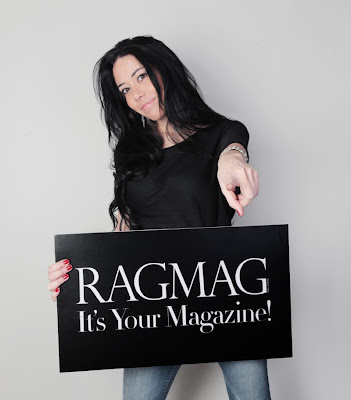 In an attempt to promote inspiring stories about people from the Lebanese Online Community, we, at Cloud961, have decided to dedicate a monthly column to interview an inspiring figure that has left a mark in the Lebanese online sphere. For your suggestions for this column, feel free to email me on mhijazi@cloud961.com.

Fida Chaaban is the Editor in Chief of RAGMAG Magazine. She is an avid tweep who joined Twitter after moving to Lebanon from Canada just over three years ago.

Q: What is your relationship like with the Lebanese Online Community?
A: The relationship I have with the online community has actually made me a happier person in Lebanon. I’ve met a lot of my close friends here through Twitter. Initially, my interaction was more of a learning experience, and now it’s basically the place where I go to keep updated on what my friends (tweeps) are up to. In addition to the personal side of it, I interact daily with the magazine’s readers via Twitter. Their comments on everything related to RAGMAG are welcome at all times, and Twitter makes it easy for them to discuss with me directly how they feel about our content. I think there are a few bad apples in every bunch, and our online community is no different than any other in this regard. I try as much as possible to keep the gloves on, so to speak.

The creepiest incident? A random tweep tagged me, Shakira and Marcel Ghanem in a tweet with a picture of himself reclining in a sort of Arab tent scene. At first I thought there was a gun next to him in the picture, but it wasn’t clear enough to tell for certain. I think the last time I looked, I felt that it was something like a TV remote control, not a gun. And about him tagging me with Shakira and Marcel Ghanem, well I’m not sure what the link is there.

Other than that, I don’t mind negative comments – everyone’s got an opinion and far be it from me to infringe on that. Different communication methods suit different people.

Q: Do you think that the Lebanese online scene has become more aggressive and hateful lately?
A: I do think that actually. Aggressive can have either a positive or negative connotation and in this case, I feel that it has both. We are definitely advancing, aggressively campaigning the strength of the online community which is positive. That being said, I also see the negative and somewhat alarming hate tweets, posts and persistent bashing – a few of my friends have been victims of what I consider cyber-bullying. Social media gives everyone a voice, and sometimes that voice is very, very ugly. Like any medium, you’ve got the good, the bad, and the ugly. In this case, unfortunately, I’ve noticed an escalation since the first announcement of this year’s Social Media Awards, maybe back in February.

Q: How has the online community contributed to the success of your career or RAGMAG?
A: The online community has shown us a great deal of support! The online community has pushed us further than any other group or entity in this country – not to say that we don’t appreciate all of the help we’ve been given by “offline” people – but the number one strength of RAGMAG is the active online people of Lebanon. We are part and parcel of the community and we have seen them stand by us through everything. I think the tweeps are the reason RAGMAG continues to succeed, simply because they are the people who advocate for us.

Q: Do you think it is easier or harder to discuss taboo topics on social media and in your experience, what is the reaction of the online community to such topics?
A: I personally don’t find it hard to discuss “taboo” topics at all. There are no taboo topics for myself personally or for RAGMAG in the professional sense. Everything can be treated with candour and elegance, and we try to face every subject with dignity and respect. One of our readers once tweeted that “RAGMAG is #TrueTalk” and I like having that reputation for myself and for the magazine. I guess things like sexuality, religion and the like are considered taboo? Not for us and not on our social media platforms – that said, it means that we take a purely liberal standpoint. We don’t have issues stating our stance on any number of subjects publicly, this is part of the magazine’s strategy of creating open dialogue and removing stigma off topics that are uncomfortable or “taboo” in the Middle East. I think for the online community, although I can’t speak on their behalf, the reaction to our openness has been largely positive. I have yet to have anyone tell us not to discuss anything “taboo”.

Q: What do you think about the state of the blogging community in Lebanon right now, especially after many bloggers have retired from blogging, some for personal reasons and others for lack of support from the community?
A: I think the blogs are not as stimulating as they were two years back. Further back than that I can’t really comment since I wasn’t fully in the loop during my first year in Lebanon. I also think that like any other medium, blogging can be very well done and it can be very poorly done. As I don’t blog personally, I’m really not the best judge of what a “good” blog might be, however I can say that there are only a handful of blogs in the Middle East that I enjoy reading. The others I read just to remain in the loop of what is on the mind of the online community.

Q: What are some challenges that you face by being on social media as a professional?
A: I think the biggest challenge is resisting the urge to correct my typos! No, really there isn’t much of a challenge per se? At least I don’t see one. I think if you use social media, you should enjoy it. If you can’t handle the heat, get out of the kitchen, so to speak.

Q: After living most of your life in Canada, why would you come to Lebanon to run a magazine?
A: I thought Gina Gabriel’s vision for RAGMAG was worth exploring. It was a perfect storm of factors that preceded my move to Lebanon. I was born and raised in Canada, so I definitely had an adjustment period initially, but RAGMAG has made every second worthwhile!

Q: How is the Lebanese social media scene different from the Western one?
A: Professionals in the West are way more heavily invested in their social media personas. I feel that Twitter for example is only now catching on here with professionals, and it’s a great tool for career advancement when used properly.

Q: Do you agree that print media has become a dying business? As an Editor in Chief of a magazine, how do you make sure that you reach your target audience?
A: Well, I personally love the texture and feel of printed material. I’m an avid magazine reader so you’re barking up the wrong tree. Some of my favorite magazines are The Economist, Intelligent Life, Vanity Fair, Executive, Esquire and Rolling Stone. As for reaching our target audience, we don’t advertise so all of our readers have been organic. We do place back issues of the magazine in places where our readership are likely to find us like beach resorts, gyms, and the like.

Q: Do you believe that freedom of speech should not have limits online? And when do you think it stops being freedom of speech?
A: There is a fine line between stating an opinion and sheer harassment. I don’t believe in censorship, but people are allowed to say what they want, when they want. I think any point you want to make, you can make elegantly. No need for fuss and muss – incidentally, it often weakens your position and encourages people to view you as less credible. Less is more. As for limits, again I don’t believe in censorship so I don’t have an idea of what kind of “limits” others would choose to impose. I disagree with this “limit” idea since who gets to be the person who draws the line? It’s all very subjective.