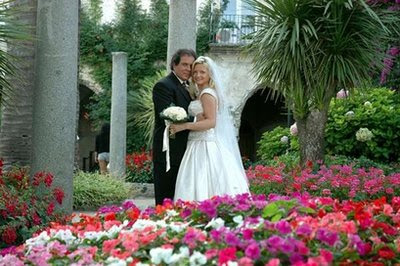 AP: Dread of the unknown hung in the air as Lynn France typed two words into the search box on Facebook: the name of the woman with whom she believed her husband was having an affair.

Click. And there it was, the stuff of nightmares for any spouse, cuckolded or not. Wedding photos. At Walt Disney World, no less, featuring her husband literally dressed as Prince Charming. His new wife, a pretty blonde, was a glowing Sleeping Beauty, surrounded by footmen.

"I was numb with shock, to tell you the truth," says France, an occupational therapist from Westlake, a Cleveland suburb. "There was like an album of 200 pictures on there. Their whole wedding."

Affairs were once shadowy matters, illicit encounters whispered about and often difficult to prove. But in the age of Facebook and Twitter and lightning-fast communication, the notion of privacy is fast becoming obsolete. From flirtatious text messages to incriminating e-mails, marital indiscretions are much easier to track — especially if potentially damaging photographic evidence is posted online.

"All of these things are just a trail of cyber breadcrumbs that are easily tracked by good divorce lawyers," says Parry Aftab, an expert on Internet safety and privacy laws.

France, 41, was not completely blindsided by her Facebook discovery, which happened in January 2009. That fall, she had grown suspicious when her husband began taking frequent business trips, even leaving the day the couple's newborn son came home from the hospital. Once, she found his passport at home when he was supposed to be in China for business.

In October, before leaving for another trip, her husband left a hotel website up on the couple's computer screen.

"So I actually went there with a girlfriend, just to see for myself for sure," France says. "He was there with this girlfriend. I said, `Hey, I'm his wife. We've got a baby.'"

The woman told France that she was engaged to France's husband.

"Sure enough, they were registered for a wedding at Target," France says.

A girlfriend recommended checking the woman's Facebook page, which was then open to the public, France says, but has since become private. There, France found evidence of an unfolding relationship that she still couldn't wrap her head around. Overwhelmed with two young children, she confronted her husband. She says he told her he wouldn't actually go through with the wedding.

It wasn't until she saw the wedding photos that she finally began divorce proceedings.

"People who engage in these sorts of behaviors now have the option of trying to keep things private or turning it into a spectacle and becoming their own reality show," says lawyer Andrew Zashin, a child custody expert who is representing Lynn France. "In this case, it seems, the spouse may have crossed the line and gotten married while he was still married."

Aftab, a lawyer who runs the online protection site WiredSafety.org, says the lesson to be learned from the Frances' case is that no form of communication is sacred anymore.

"It's like trying to catch a river in your hand," she says. "It will leak out eventually."

But Aftab doesn't recommend snooping around online. That can backfire in court if used inappropriately — such as when spouses log onto each other's Facebook pages without permission. If your spouse isn't trustworthy, she says, get a divorce and save yourself the trouble.

Lynn's husband, John France, does not deny that he has remarried. Rather, he simply is insisting that he was never married to Lynn in the first place.

His attorney, Gary Williams, issued a statement Tuesday saying his client is asking a family law court to declare that his marriage to Lynn was "void since its inception."

"While it appears that John and Lynda France were both under the impression, once upon a time, that they were married, the fact of the matter is that their marriage was never legally proper," Williams wrote, "and, therefore, it does not actually exist."

Lynn and John France were married in July 2005 in a seaside wedding on Italy's Amalfi Coast, having organized the event through Regency San Marino, which coordinates weddings for couples looking to get hitched in Italy. On the company's website, Lynn is still the first radiant bride whose portrait appears in a gauzy veil, the brilliant blue sea behind her.

If that wedding was a fraud, it was news to Lynn.

"If that were true, then he's lied to the IRS," Zashin says. "He's lied to insurance companies. Banks."

In June 2009, against the advice of her attorneys, Lynn France dropped divorce proceedings when her husband came home and persuaded her to reconcile.

"I just wanted to believe the good when he came to me and said, `Let's reconcile, I love you,'" she says. "You want to give somebody a second chance."

But three months ago, Lynn says she was cleaning the sink when her husband took the couple's 2-year-old son out of her arms and said he was going to give him some milk. Minutes later, she heard the car running.

"He threw them in, no car seats, no nothing, and took off," she says.

She hasn't seen her sons since. John France had taken them to Tampa, Fla., where he currently lives with his new wife and, according to his attorney, is seeking custody of their children.

Lynn France called 911, but as in most parental custody disputes, little could be done. She is in contact with the Center for Missing and Exploited Children and has a team of attorneys preparing for a court fight. Authorities have told her not to attempt to take back the children forcibly.

For Lynn, the only glimpse of her children now comes, ironically, from the same Facebook page where she found those fairy-tale wedding photos.

Until the day she can see her children again, Lynn France says she continues to text her husband, pleading with him to bring the children back to Ohio.

"The only way I've been able to see my children is on her Facebook page," she says. "It's stranger than fiction to watch this woman living my life."