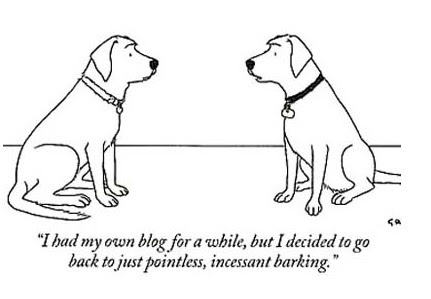 Recently, everywhere I go, I've been referred to as a trouble-maker or even introduced as a mischievous person. While there's no shame of having this label, it is constantly starting to stick as a negative reputation because of gossip and word twisting (what the Lebanese call "adding salt and pepper to the story".

So why do I have this reputation, you ask?

It all started with an article I wrote criticizing admissions at a highly-reputable institution and from there on, people have atributed my constructive criticism to anything I wrote or even spoke about as an initiative to cause trouble or ruin reputation. This middle-eastern culture doesn't account for constructive criticism or personal opinion. We are in a culture where if you criticize something, then you are its enemy. Perhaps this is how politics works, but that isn't how I work.

Think about it, when I invest effort and time in writing about some negative aspect of most topics, does it mean that I have so much extreme hatred for it? On the contrary, it is because I care or because I belong to that sort of institution that I take the time and effort to constructively criticize. Another reason that I post is to make people in charge aware of what's going on behind their backs and/or "under the table".

Another reason I am being called a trouble-maker lately is because I use social media to voice my opinions. Most people/institutions in Lebanon and the middle east are afraid of social media not only because they are not familiar with it, but because they cannot control it. One regional example to this is the Benihana Kuwait lawsuit that's currently going on against a customer who posted a review on his blog.

Most bloggers use their blogs as a means to voice their own opinions, and in my experience, most bloggers are very honest. I've seen many great posts above many topics (from billboard ads to reviews) where bloggers constructively criticize (or even praise) different parties. This is how the response usually goes: if a blogger is a promoting something then he's an angel, but if he criticizes, then he's the devil's incarnate on earth. Institutions and individual usually attack criticism by lawsuits, job terminations, deleting comments, banning users from facebook groups or forums and ignoring them. What they need to realize (and this might take them a while if they keep this mentality) is that this is where the world is going. Social media is your friend: it is there to help you improve. If a customer complains of an employee who is conducting unethical/illegal behavior (such as accepting bribes, favoritism, stealing, etc...), as a manager you should investigate the issue rather than blaming the costumer. Chances are this customer is right, and that being a manager, you might have not noticed such details in daily operations.

A third reason is that some actual trouble-makers (or I'm gonna refer to them as influential gossipers and bad-mouthers) are going around and spreading false rumors that I have argued with every individual or party imaginable. For this reason, I am not worried because I'm assuming that people in the right minds can do some analytical thinking and decide whether what they are hearing is true or not, and I'm hoping they consult me for my side of the story (the true one) on issues that I would rather not discuss on here at the moment.

So there you go people. I really don't consider myself as a trouble-maker for the sake of fighting with people. I believe in honesty, justice and equal rights (anti-discrimination) and I that is why I like to post about issues that may not be very positive towards everyone. I am, however, fair when I discuss issues that I encountered personally.

I'm just a guy, like any other, who likes to voice his opinions on matters that he cares about in hopes of improvement. That's it. No attention-complex, no trouble-making urge, no nothing.