By M March 12, 2011
Today, March 12, is the world day against cyber-censorship. This day was initially launched by Reporters without Borders in 2008 and "is intended to rally everyone in support of a single Internet without restrictions and accessible to all."


The fight for online freedom of expression is more essential than ever. By creating new spaces for exchanging ideas and information, the Internet is a force for freedom. In countries where the traditional media are controlled by the government, the only independent news and information are to be found on the Internet, which has become a forum for discussion and a refuge for those who want to express their views freely.

However, more and more governments have realised this and are reacting by trying to control the Internet. Never have so many countries been affected by some form of online censorship, whether arrests or harassment of netizens, online surveillance, website blocking or the adoption of repressive Internet laws. Netizens are being targeted by government reprisals. Around 117 of them are currently detained for expressing their views freely online, mainly in China, Iran and Vietnam.

World Day Against Cyber-Censorship pays tribute to them and their fight for Internet freedom. Reporters Without Borders will mark the occasion by issuing its latest list of “Enemies of the Internet.”

When I started this blog two years ago, I was unaware of such censorships that apply to internet pages. I always thought that anyone can say anything on the internet. But I was wrong. I witnessed this first-hand last year when I got fired from a position because of something on my personal blog. Yeah, can you believe it? I thought it was the end of the world at the time, but I discovered quickly that internet censorship is a very common practice. As days went by, I was even more shocked by some things that happened:

Why am I posting all this? 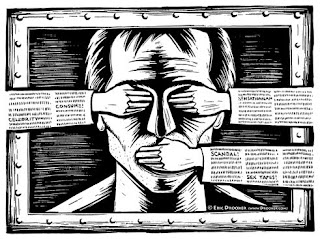 Well because after all these incidents (and many others), I want the world to realize how freedom of expression is important and how even the most advanced and democratic countries in the world (US and Europe included) contribute to cyber-censorship. I want to raise awareness about the limitations that we still have in this world at a time when mankind has achieved so many technological and evolutionary advances. We are in the 21st century! You would think that people would at least have the freedom to say what the want. I guess there's still a looooooong way to go!