Why was Osama Bin Laden really buried at sea? 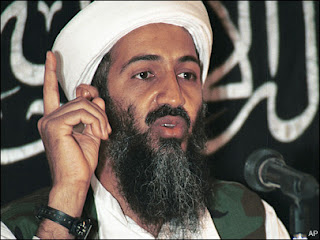 I woke up this morning with a flood of news about Osama Bin Laden's death on facebook, twitter, google reader, buzz and so forth. With all the celebrations and the worldwide debate (he's even trending on twitter), something smells very fishy, and its not coming from the sea.

So U.S. troops kill Bin Laden, and throw him into the sea within 24 hours of his death. You would think that after ten years of searching for the "most wanted terrorist on earth," the body would be kept for more than one day.

TIME newspaper ignorantly attributes this action to Islamic tradition, and that the troops directly threw the body into the sea because the did not want to offend the Islamic beliefs of burial. I quote:


The reason is bound up within Islamic practice and tradition. And that practice calls for the body of the deceased to be buried within 24 hours, according to a U.S. official, who spoke Monday on condition of anonymity to discuss sensitive national security matters. [..] "We are ensuring that it is handled in accordance with Islamic practice and tradition," confirmed the official. "This is something that we take very seriously. And so therefore this is being handled in an appropriate manner." [source]

What I have to say about this is: BULL CRAP.

I highly doubt that Americans care about how a body of a Muslim terrorist is handled considering all the massacres they are inflicting on innocent Muslims around the world from Palestine to Iraq to Afghanistan to Libya. That's the first point.

The second point is that no where in the Islamic Beliefs does it say that a corpse has to be buried within the first day. It is preferable that it gets buried as soon as possible, but on countless occasions, and especially in controversial situations like this one, corpses can be left unburied for sometime until the disputed situation is cleared.

The third and most important point is that no where in Islamic ruling does it allow corpses to be buried at sea. The only way one can dispose of a corpse is to bury it in soil (because according to Islam, a human being was created from mud, and to it he shall return).

So spare me the bullshit about the sensitivity of the Americans. I'm pretty sure they are hiding something or possibly making it up to ensure Obama's stay in power for another term. For whatever reason, it seems very sketchy, don't you think?