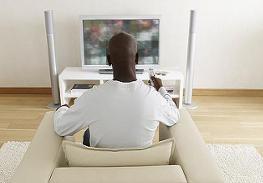 TV is not your friend. In fact, according to a new study, it's your mortal enemy. Researchers have discovered that every hour per day spent watching television increases your chance of dying from heart disease by one-fifth.

We all know a sedentary lifestyle can lead to disastrous health problems, but this new study shows even the most physically fit are at risk for heart disease when they spend a good amount of time watching TV.

"Even if someone has a healthy body weight, sitting for long periods of time still has an unhealthy influence on their blood sugar and blood fats," says Professor David Dunstan, the study's lead researcher.

Australian scientists, lead by Prof. Dunstan, looked at about 9,000 people over the course of six years, grouping them into categories depending on how much television they watched. The group that watched the most (four or more hours a day) were 80% more likely to develop heart disease and die from it.

According to Professor Dunstan, this has as much to do with the fact that television is the most popular form of leisure as it does that our general lifestyles have changed.

"What has happened is that a lot of the normal activities of daily living that involved standing up and moving the muscles in the body have been converted to sitting," he said. "Technological, social, and economic changes mean that people don't move their muscles as much as they used to - consequently the levels of energy expenditure as people go about their lives continue to shrink."

So what should you do? Get moving! Find creative ways to keep mobile -- bike instead of drive, do chores while watching tv, throw away the remote -- and you'll give yourself the best chance for a long and healthy life.