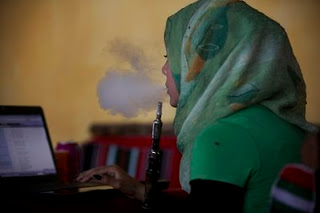 NAHARNET/AP: Gaza's Hamas rulers have banned women from smoking water pipes in cafes, calling it a practice that destroys marriages and sullies the image of the Palestinian people.

The ban marks the Islamist militant group's latest effort to impose their Islamic lifestyle in the seaside strip on an often resistant public.

While Islamic law does not technically ban women from smoking the traditional tobacco-infused pipes, tradition frowns upon the habit. Hamas frequently mixes its strict interpretation of Islamic law with conservative Gaza tradition, and over the weekend, the two dovetailed to produce the smoking ban.

"It is inappropriate for a woman to sit cross-legged and smoke in public. It harms the image of our people," Ihab Ghussein, Hamas interior ministry spokesman, said in a statement released Sunday.

"Many women who smoke in public were divorced when their husbands saw them, or found out about them," said Hamas police spokesman, Ayman Batneiji, without substantiating his claim.

The ban was handed down by plainclothes security officials who marched through a strip of popular cafes by Gaza's seashore over the weekend, ordering owners not to serve water pipes to female customers.

Confused owners initially thought the ban applied to both men and women, killing most of their evening business. The Hamas government swiftly issued a statement reassuring residents the ban only applied to women.

Smoking water pipes is a popular habit among both sexes in the impoverished Gaza Strip. Although it is considered culturally inappropriate for women to be seen smoking them in public, some middle-class ladies smoke the pipes openly, often in mixed company. Even more conservative women can be seen taking an occasional puff of their husbands' water pipes.

"This is silly," fumed Haya Ahmed, a 29-year-old accountant who said she has smoked water pipes for 10 years. "We are not smoking in the streets but in restaurants where only a few people can enter."

She predicted the ban would have the opposite effect of its intention and make water pipes more tempting for rebellious young women. "Everything forbidden becomes desirable. The decision will lead to more smokers," Ahmed said.

Many Palestinians see the water pipe as inappropriate for women because of its sexual innuendo, and because it looks crass for ladies to smoke, said Palestinian anthropologist Ali Qleibo.

It is not clear how strict Hamas will be in enforcing the ban.

Many residents are deeply sensitive to any effort by Hamas to infringe on the few forms of entertainment available to Gaza's 1.5 million people. For three years, they have lived under an Israeli and Egyptian blockade that has penned them into the tiny coastal territory. Many Gazans pile into beach cafes in the evenings to puff on water pipes well into the early hours.

A cafe and restaurant union representative in Gaza, Ayman Abu Khair, estimated the ban would cost cafe owners some 10 percent of their income.

He said owners were not warned before Hamas police barged into their establishments Friday night issuing the verbal order. Abu Khair said the union hoped to challenge the ruling.

The militant group has backed down in the past when it senses resistance to its harsh rules. A ban on men working in female hair salons was never enforced, and a demand that female lawyers cover their hair before they enter courtrooms was quietly rescinded.

But Hamas has successfully banned women from riding motorbikes, arguing it was culturally inappropriate. It also instructed teachers to pressure teenage girls to cover up in long, loose robes and headscarves. Last year the group cracked down on Gaza's tiny number of moonshiners and banned foreigners from bringing alcohol into the blockaded territory.

For Ahmed, the ban has been a damper. "I smoked (in public) with my family around," she said. "Now, I will smoke at home."